Trending
Home / African music / Entertainment : Nonso Amadi is Paving His Lane in this New Generation As He Cover’s Vibedotng Magazine

Entertainment : Nonso Amadi is Paving His Lane in this New Generation As He Cover’s Vibedotng Magazine 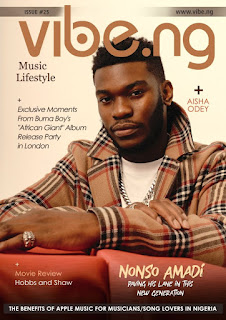 I can never forget the first time I heard ‘Tonight.’ It came on the radio when my friends and I were on our way to a certain location to paint the night red. There was something about the song; a level of originality that drew me to employ my investigative skills. So I researched and my first discovery was ‘Alone the Ep’, Nonso’s first RnB project.

I still cannot distinguish what makes Nonso Amadi’s songs unique. The calm richness of his voice, the intelligently composed words, or the finesse he used in producing them. Either way, there’s a serenity to his tracks that makes one nostalgic, and anytime I hear ‘Tonight,’ I’m always taken back to that night; the street lights, the cool breeze and Nonso Amadi’s voice giving me goosebumps.

In respect to originality, Nonso has never failed to infuse African sounds, a style he calls Afro-fusion.

“I DO A RANGE OF STYLES SO IT’S A LITTLE HARD TO BOX THEM IN ONE STYLE. IF I HAD TO, I’LL SAY AFRO-FUSION BECAUSE WHETHER IT’S RNB OR SOUL, IT’S INFLUENCED BY THE AFRICAN SOUNDS AND ELEMENTS”.

It’s easy to denote a hopeless romantic from not just what they say, but the way they say it. This encompasses their emotions, the way these emotions are expressed as well as the sincerity in their expressions. One trend in Nonso’s songwriting is how he easily draws in love and its plights. Heartbreak, for example, is a prominent theme in his lyrics. Then again, what’s a romantic without a couple of heartbreaks? Take Sam Smith and Adele for instance.

Nonso’s experience has become what defines his perception, or better still, what influences it.

“I’M AGAINST INFIDELITY HAVING BEEN A VICTIM ONCE. I SING ABOUT THIS SOMETIMES. IT’S PROBABLY THE THING THAT HURTS THE HUMAN SOUL MOST”.

Despite a couple of bad experiences with romance, Nonso writes beautiful love songs. Not all artists can write, sing, and produce. Especially since the writing takes a certain level of education and comprehension.

What sparked your interest in music?

Several things. Most significant was seeing my friends do it because that had an element of peer influence. I saw them make great songs right in front of me and that made me want to try it out.

What genre would you classify your music under?

I do a range of styles so it’s a little hard box them in one style. If I had to, I’ll say Afro-fusion because whether its RnB or soul it’s influenced by the African sounds and elements.

What is the biggest challenge you face as both a singer and songwriter?

I’ll say the recurring internal struggle on whether to make a song for yourself to enjoy or the people or even finding a balance between the two.

What constantly inspires your writing?

Different experiences. Things I see and hear. Ultimately, I always want the listener to have a certain feeling whenever they hear my songs.

How do you intend to evolve as a new generation artist?

I’m invested in self-development as an artist. Improving stage performances, production, brand and so on. I’m constantly looking for new ways to get better.

Do you prefer the production stage in music to the performance stage?

I prefer the performance stage that’s what allows you to appreciate the musicality of the songs. Hearing the guitars, bass, drums played live is truly gratifying.

What’s your weirdest encounter yet with a fan, while performing?

I haven’t had any weird encounters yet. Every fan has just been sweet and amazing so far.

Which artist would you love to collaborate with this year?

This year, I’m looking forward to working with Koffee.

Which song would you consider as the biggest song in Nigeria right now?

“I Just Had My First Kiss” – Rema Makes Bold Revelation