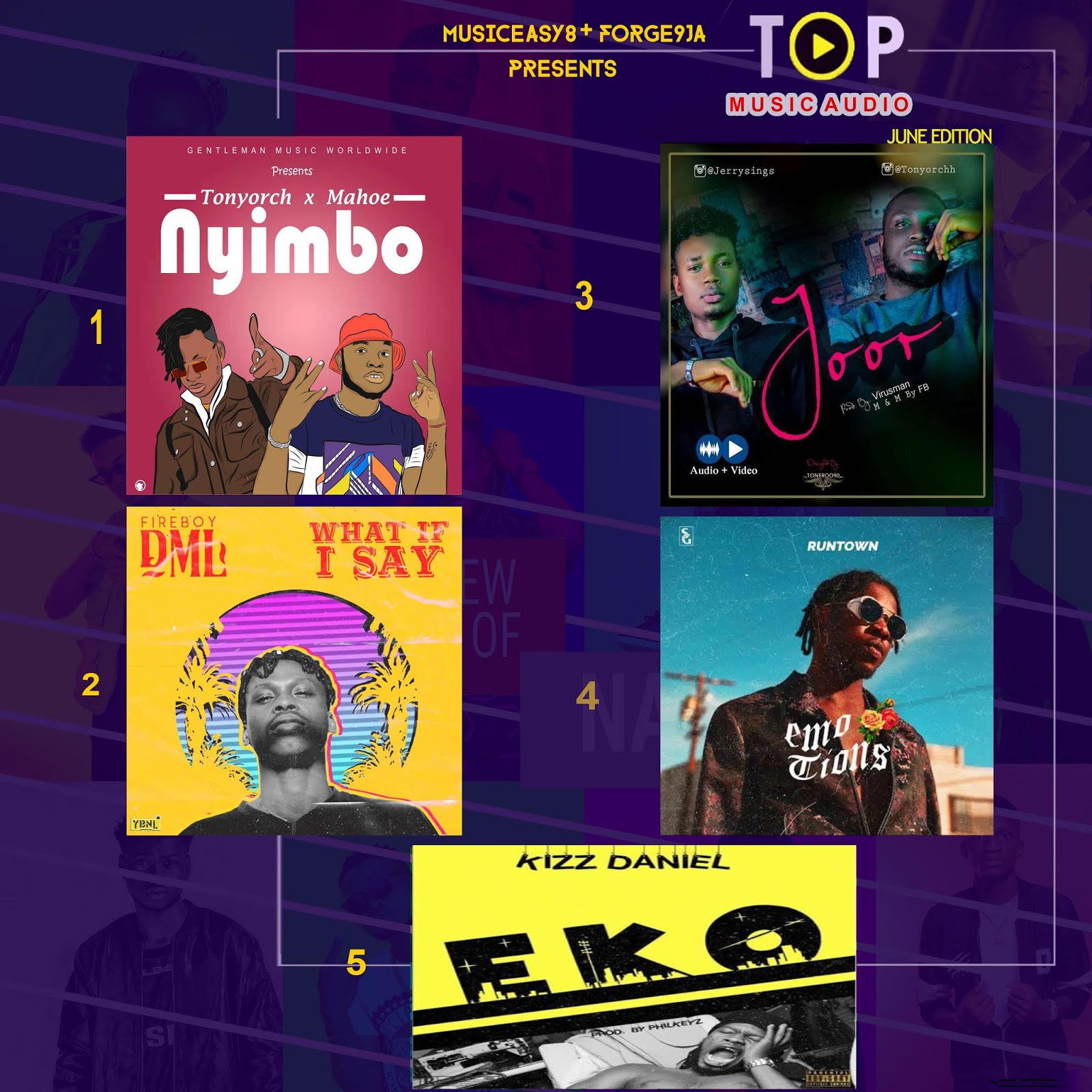 MUSICEASY8 AND FORGE9JA PRESENTS
TOP 5 MUISC VIDEO JUNE EDTION
Album‘s, Singles, and EP’S were dropped back to back in the month of June from our favorite artist
Giving us the best buzzing songs , from the likes of RUNTOWN , ICE PRINCE , MR EAZI , REMA ,OLAMDE YUNG6IX ,YEMI ALADE , TONYORCH, MALEEK BERRY, JERRYSINGZ , FIRE BOY DML AND MANY OTHERS
And we have selected 5 most trending songs in our platform,
1 TONYORCH X MAHOE- NYIMBO -REMIX
2 FIREBOY DML- WHAT IF I SAY
3 JERRYSINGZ FT TONYORCH -JOOR
4 RUNTOWN -EMOTIONS
5 KIZZ DANIEL- EKO
1 TONYORCH is an afro pop artist .He has made an impressive run in this year dropping his first single of the year Nyimbo remix which features another talented artist mahoe . Mahoe  who delivered a good piece of melody on the track , this  collaboration has Gained a lot of recommendations and it’s the most downloaded song in our platform with over eight thousand downloads and stream this made it the number 1 in our list
listen below
2 FIREBOY DML – The young YBNL hit maker is in no  way slowing down . this year he has giving us one of the best songs ( Jealous )  and his back again with another good song , called what if I say
His unique style melody on this track got his fans loving it and there is more coming your way , we have made it the number 2 in our list
listen below

3 JERRYSINGZ dropped his long awaited single. His fans had no idea what kind of song he was about to drop until it was released  and this tuned out to be a motivational  songs which featuring amazing star Tonyorch and it went viral this made the song among our top 5 songs
listen below

4 RUNTOWN the sound God who just dropped his  6 TRACKS EP  Tradition . Runtown is in no way competing with any trending gist in the Industry his known with his one-time jam which is highly anticipated and accepted  by music lovers,  The superstar has his own way of music, sound  his unique style and difference and the number 2 track Emotion on his EP has gained a massive audience in our platform with much stream comment and downloads this made it the 4th  in our list
listen below

5 KIzz Daniel Eko ( Lagos ) the FLYBOY INC and boss has put in a great work since the departure from GWORLDWIDE . the young Established Nigerian superstar . has been creative in his own styles of  music and this year he has giving us back to back hit tracks  this made him one of the influencer musicians in Africa His latest single EKO has been wave of the street  and among the most downloaded songs in our platform with thousands  of downloads and good recommendation EKO by kizz Daniel is one of the top 5 songs in our list